My wife decided the living room closets had been neglected for too many years and needed a good going through.

One result was a stack of wire coat hangers to be trashed or recycled. She didn’t care which but they had to go. “We use plastic hangers nowadays.”

Thus another relic of the past goes the way of rotary phones.

When I asked, “How I will tie up the car’s muffler if a bracket breaks?” as I clearly remember doing once or twice, her amused response was, “When was the last time you needed to do that?”

I think the last time was in the 1980s and I don’t want to look too closely at how far back that is now.

While metal hangers are very handy when you need a piece of sturdy wire, all I wondered was how kids today would ever do the coat hanger trick.

Eons ago, in fifth grade, I found a book that told what to do. Tie the middle of a four foot long string to the hook of a metal coat hanger. I used kite string then but found even thick thread will do.

The next part was a bit fiddly. You wrap each end of the string around each of your index fingers, two or three turns, keeping them even. The hanger hangs down in the middle. Bump the hanger into the wall to hear the tinny little  *ting* it makes.

Now, put your index fingers in your ears, plugging them up, and bump the hanger into the wall again.

Of course, it’s only the vibrations being channeled directly to your ears but it’s surprising how loud it is. It’s really worth a try.

If you’ve already disposed of your wire hangers, a metal cookie rack will do or even a large serving spoon. 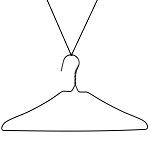 The closets looked neat and clean and, after boxing up the old coats to donate, all that was left was the pile of wire hangers on the armchair.

Did I really think she wouldn’t notice them?

Happy at a job well done, she headed to the kitchen, thumbing a gesture at the front door with two words. “Hangers. Out.”

So I bundled every last metal hanger into a thick plastic bag, put a twister on it, and as directed, took them out . . . to the shed where I put them all in a box.