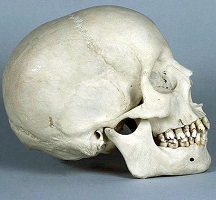 Despite my reading of science and available medical books at the time, in a lot of ways I was a somewhat clueless teenager.

When my wisdom teeth started to come in, I saw the x-rays of my jaw and was a bit stunned to see that I had an actual skeleton in my body.

Okay, you can stop laughing now.

Yes, I was quite familiar with the bones inside us all but it’s one thing to learn about the framework our bodies are built on, with its 700+ muscle attachments, and quite another to actually see your very own skull and jawbone.

Not to mention it absolutely destroyed the fantasy that I was secretly an alien robot.

A few years ago, my wife and I visited Las Vegas and discovered the Luxor Hotel had an exhibit on the human body. It was wonderful, in a macabre sort of way.

The bodies were preserved by a process called plastination, which allows visitors a detailed look at what most of us never see.

I found the many cross-section views fascinating and surprising at the same time. The surprise came from how tightly packed we are inside!

Feel your breastbone, the sternum, where you know your heart is located inside your chest. It’s well protected there but I was amazed to see, in a cross-section view, that our hearts are barely more than half an inch from our fingertips! So close, yet it seems like it should be deeper inside.

Shortly before our trip there, my wife had sciatic pain from a herniated disk. One of the displays had an amazing view of the spine. I was able to point out the particular disk that was most probably damaged and how it would press on the nerve, seen right there, to cause pain from the pressure.

I didn’t notice that an elderly man and his young granddaughter were also listening to my explanation. As we turned around, he asked if I was a doctor.

My first impulse was to make the lame joke that I don’t have the patients but the young lady looked so engrossed in it all that I replied with the truth that I just love learning at least a little about almost everything.

If you ever have the chance to visit one of these exhibits, I highly recommend going. They pop up in major cities, currently Las Vegas and Atlanta, with stops at smaller cities across the US and around the world.

And, yes, you can even find exhibits on animals.